This time a very summer-y PubhD session took place at the Redhouse pub and what better context for our speakers and audience than great academic talk and a refreshing pint with the sun out?

Presenters from both Northumbria and Newcastle University gathered a large crowd of researchers, PhDs, lecturers and non-academics to listen to their presentations. Topics ranged from Applied Science, Speech and Language Sciences to Law!

First off was Anastasia Trebacz, from Newcastle University. She introduced her research on speech therapy for 3-year-olds, where she drew compelling arguments as to why trials about speech and language therapy is needed. That was a great opportunity for us in the audience to learn some sign language and listen to the joys and challenges of doing research in schools!

After a short break (and a pint), Marc Stuhldreier, a PhD student in Law from Northumbria University, guided us through his research on zombie viruses and neglected diseases. His presentation shed light on some controversial aspects of patent law and the pharmaceutical industry, spurring conversation among the audience.

After another pint (of course!), our last speaker for the night, Giorgia Marucci from Northumbria University, showed us that art and science are not opposite worlds. She laid out in a simple way the complex scientific methods she is using to study the chemical composition of ancient manuscripts. Not only did she bring one of her infrared camera for us to play with… she also helped us understanding these complex techniques with metaphors on beers, in the true spirit of PubhD! 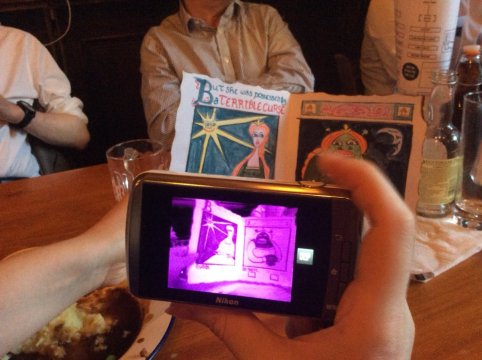 The event ended with a round of applauses for our three speakers, who were able to make their studies accessible to a supportive and engaged audience.

Hence, we look forward to listening to your voice for our next event in November 2018! 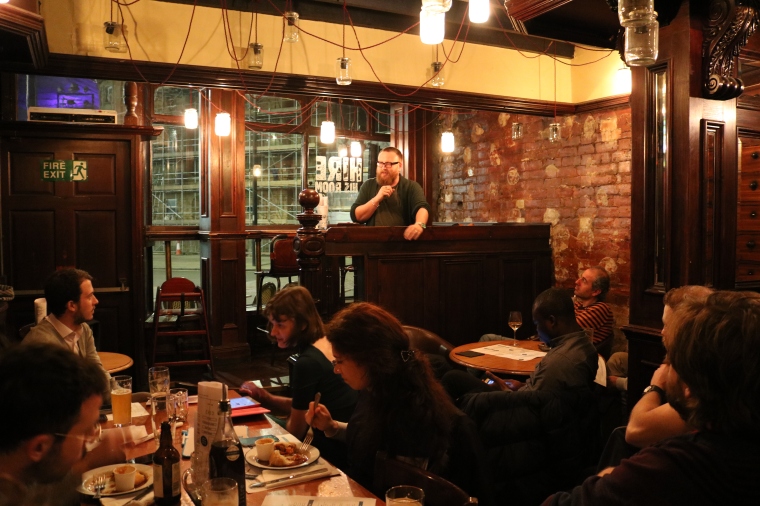 A large group of students – but also non-academic people enthusiastic to listen to our presenters while enjoying a drink – gathered around three speakers coming from Northumbria and Newcastle University, who are experts in a wide range of disciplines, from Gender, Sexuality and the Law to Data Forensics to Archaeology: there literally was something for everyone!

Aaron Amankwaa, the first speaker of the evening, talked us about public perspectives on DNA databases. At the end of his talk, no one had still doubts that the life of police officers is nothing like CSI! 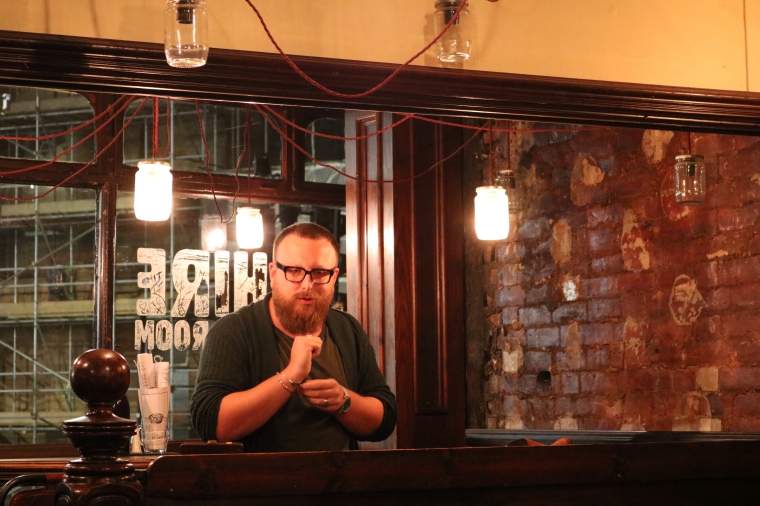 After a short break, Marco Romeo Pitone, a PhD student in Archaeology from Newcastle University, guided us through his research on the origin of metal processing in the island of Cyprus, or – as he labelled it – archaeology of scrap! Marco even brought his own rocks to explain to us why he came to Newcastle to study slags, and discussed the process of experimenting on metals and ores. After his talk, we will never look at slags the same again. 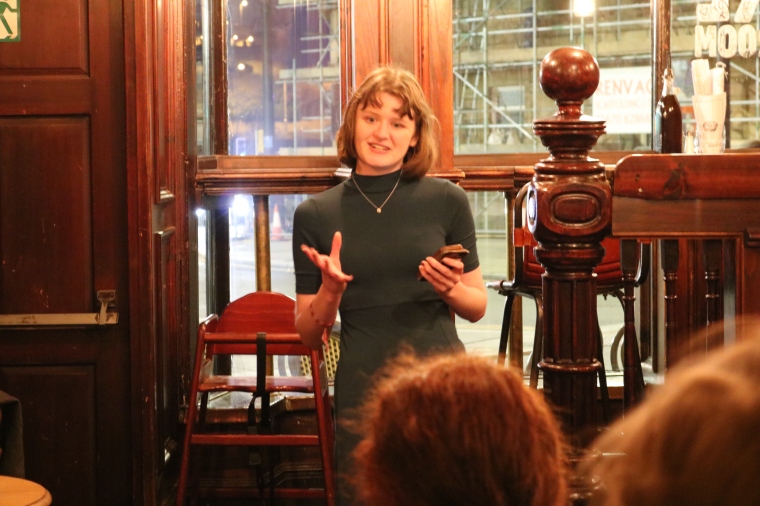 PubhD team member Rosie gives a recap of the November 207 event in Newcastle. 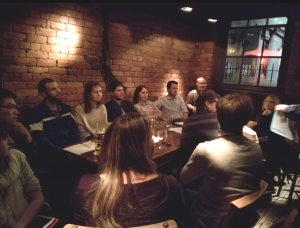 On Thursday 23rd November 2017, PubHD Newcastle returned to its haunt at the Town Wall. Over 20 PhD students and their colleagues braved the cold northern winds and enjoyed an evening of three varied and exciting speakers from a number of disciplines, as well as an opportunity to network and discuss their own projects also. We were delighted to welcome both speakers and students from across the North East – Newcastle, Northumbria and Durham were all represented at the event, as were disciplines ranging from law to engineering.

The first speaker of the evening was Merrel Knox, a PhD student and graduate tutor from Northumbria University, who discussed the role of leadership in dangerous contexts.She came armed with a selection of anecdotes from her experiences in the field, conducting focus groups with established teams within the emergency services, and gave us some fantastic advice for conducting qualitative research.

After a short break, we heard from our second speaker, Adam Robinson from Durham University. Having just completed his viva, Adam presented his research on techniques used to map the structure and shape of the ocean floor using seismic waves. He provided some useful tips – do not attach your dynamite to a table and light it! – and wonderfully clear explanations as to how these techniques worked, including caves, hot dates, and dead hamsters. 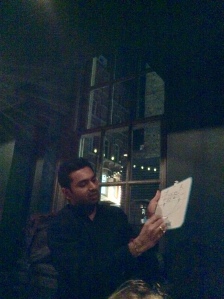 Our final speaker of the night was Piyush Dhawankar, an engineering student from Northumbria University. His research involved the very topical and futuristic ideas behind developing a model of communication between driverless cars, with the aim to make them safer and more viable to the market. The wide scope of his topic was seen in the questions, which crossed everything from computer science to business!

The event provided a fantastic opportunity to hear about the work going on outside of our own disciplines – and even our institutions! The audience was supportive, enthusiastic and engaged, and the speakers did a great job at making their work accessible for everyone there. Look out for our next event in February 2018!

In this week’s post, PubhD Newcastle team member Tracy Kirk gives us the low down on our latest event… 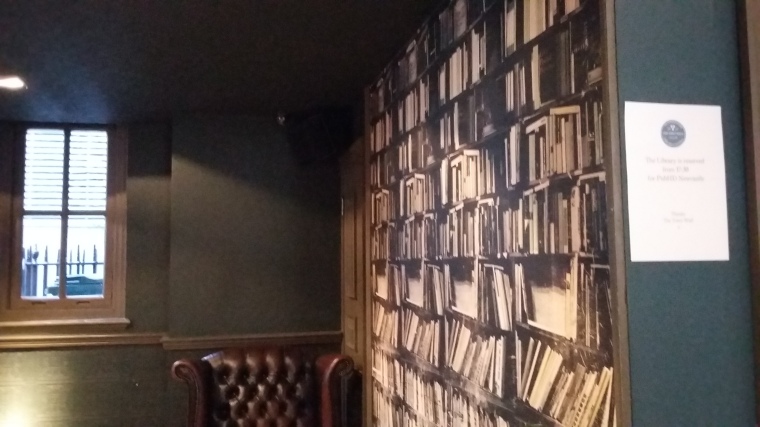 Thursday 21st April 2016 saw the second PubhD Newcastle event in The Town Wall pub. The aptly named ‘Library Room’ provided the perfect atmosphere for some PhD chat. Some familiar faces came back for their second helping of PubhD and there were some new faces too.

First up was Kathryn Gray who introduced us all to the wonders of immunology. Clearly very passionate about her research, Kathryn outlined the ‘pub level’ science involved in searching for therapies for specific liver problems. The hard work and dedication needed in the lab; doing lengthy experiments for a small amount of useable research data, showed the different types of pressure science PhD students face.

Then came the thought provoking questions, when Kathryn explained how her research suggested a potential link between immune effecting diseases and landfill sites. The abstract application of Kathryn’s science knowledge to everyday use of products helped us see that although we may not understand the deepest intricacies of the lab, we benefit from it greatly. It was brilliant to see someone with so much passion and enthusiasm share her research with a bunch of non-science people; I think we all left feeling cleverer – without any effort too!

After a small break, we heard from John Schoneboom, a second year creative writing student at Northumbria University. Without a doubt, John engaged everyone from the start – just as all the best writers should! Discussing the differences between fact and fiction in relation to modern day terrorism, John effectively showed that most of us are willing to accept news stories as fact without much question. John’s ability to grip our attention with the use of topical examples was one of the most unique PubhD experiences we’ve witnessed so far… I’ve no doubt that John’s book will be one to look out for.

Last, but by no means least, Christopher Wallis took us on a history tour – back to the years of Jimmy Carter’s presidency. Chris, also from Northumbria University, described his passion for analysing the US foreign policy during this time period. This passion, he admitted, was despite warnings from someone who worked within the administration saying it wasn’t an interesting period to live through! Nonetheless, Chris’ discussion of in-fighting within the government, and its significance for how other presidents have led, brought us to a modern day comparison of how President Obama has led his administration. Chris was even asked about his predictions for the upcoming American Presidential election – Hillary was his one to watch. 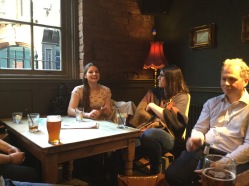 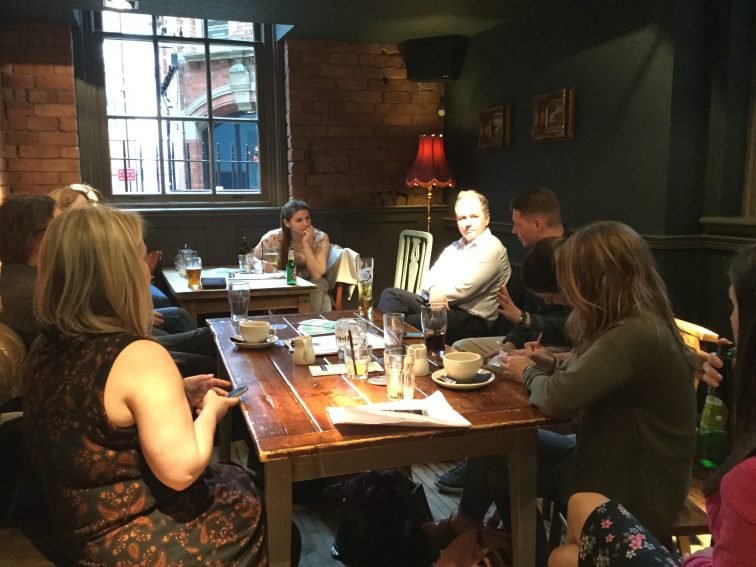 Another enjoyable hour in the pub, with new friends and PhD chat. Some stayed on for more drinks, while others went off home, but everyone had only positive comments for the evening. After all, where else can you hear about immunology, creative writing and US foreign policy over a drink? 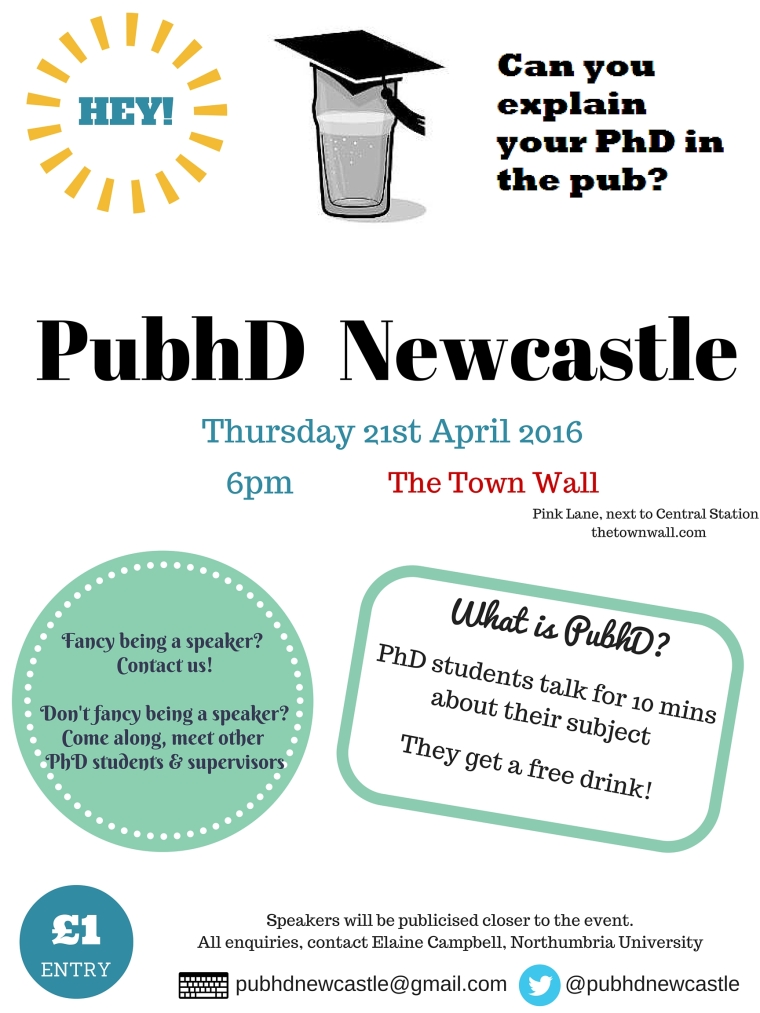 On Thursday 26th February 2016, we held our first ever PubhD Newcastle!

Over 20 researchers from across the North East made their way to the perfectly-named ‘Library’, an upstairs area at City Tavern, and settled in for an engaging evening of PhD chat.

Faced with just 10 mins to explain their PhD topic, our amazing speakers did a fantastic job. First up, we had Lucy Hatt, of Newcastle Business School. Lucy provided us with a fascinating insight into the idea of ‘entrepreneurship’ and ‘threshold concepts’. Lucy’s work resonated with a number of our attendees, who said they saw parallels with their own disciplines. Lucy was followed by Tracy Kirk, doctoral student at Northumbria Law School. Tracy’s work explores the rights of adolescents and her passion for this topic was clear for all to see. Tracy’s talk encouraged a very useful discussion about methodology. Finally, we  Chris Simmonds, also of Northumbria Law School, spoke about his work as a clinical legal educator and the conceptualisation of the phrase ‘social justice’. Chris led us in a lively discussion about unmet legal need in our local area – and how law clinics could look to fill gaps in provision.

We had nothing but positive feedback from members of the audience. A relaxed, fun atmosphere – we had lots of mingling and got chatting during the breaks. We were also delighted to be joined by Professor Roy Sandbach (@profRoys) and Dr Elaine Hall (@respartnersedu), both of whom provided excellent & supportive tips about PhD study to our speakers and others in the room.Some of us even stayed after the talks were over for a few more drinks and lively chat about the ups and downs of doing a PhD. Thank you to everyone for making the inaugural PubhD Newcastle go off with a bang!

Lots of people were keen to know when the next PubhD Newcastle would be. Watch this space – an announcement is coming very soon… 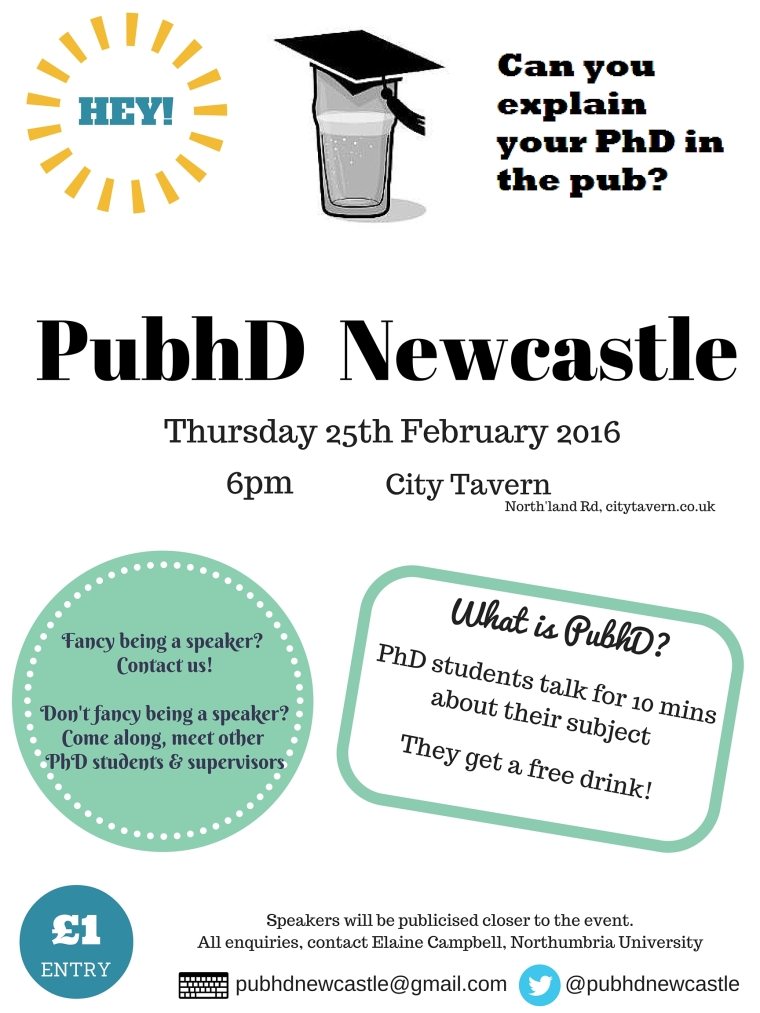